JavaScript is deactivated in your web browser. Please enable JavaScript or upgrade your web browser to the latest version.
Search
Close
Audi closes August with around 150,100 automobiles delivered > 2019 > Audi China

• Due to prior year effects worldwide deliveries down 2.5 percent in the month
• Increasing demand in China and North America
• Hildegard Wortmann, Member of the Board of Management for Sales and
Marketing: “New models will produce growth over the next few months”

Ingolstadt, September 6, 2019 Audi delivered around 150,100 autom obiles to customers worldwide last month 2.5 percent less than a year ago. In August 2018, the sale of models in stock particularly in Europe had contributed to exceptionally high growth in deliveries. As such, Audi saw deliveries fall 4.7 percent on the home continent last month. Deliveries rose in North America (+0.9% to around 25,650 cars). In the Chinese market, demand increased by 2.0 percent to 58,580 units. The
cumulative decline in worldwide deliveries was down 4.5 percent.

“The unusual fluctuations with deliveries last year still affect our business this month. Over the next few months, the signs continue to point clearly to growth for Audi,” says Hildegard Wortmann, Member of the Board of Management for Sales and Marketing at AUDI AG. “Our new models including the new Q3 or the updated Q7 will develop their full momentum.”

The International Motor Show (IAA) in Frankfurt will showcase Audi’s new model range. This year the Four Rings will be presenting the Audi Q3 Sportback, Audi RS 6 Avant and Audi RS 7 Sportback models at the show. The Audi A4 and Audi Q7 models, which have undergone a complete technology and styling update, will also make their auto show debut. The company will also be providing a glimpse of the automated mobility of the future with a technology study.

In the last month, the locally produced Audi Q5L in particular contributed to growth for the brand in China: 13,785 Chinese customers opted for the model in August, 25.3 percent more than a year ago. Across all models, the Four Rings achieved the strongest August delivery figures in Audi’s history in China (+2.0% to 58,580 cars). Since January, the Ingolstadt-based carmaker delivered 427,447 automobiles in the Middle Kingdom (+2.4%).

In summer 2018, Audi stocked up its markets in the run-up to the WLTP switch to compensate for restrictions in its freely configurable portfolio. The sale of these models in stock contributed to exceptionally high non-recurring effects regarding deliveries in August 2018. As such, deliveries last month were down year-on-year in Europe (-4.7% to around 57,400 cars). Germany reported a 3.3 percent drop in deliveries with 21,473 units handed over to customers. The Audi Q3 once again provided an important boost to business on the home continent. Apart from Germany (+14.6% to 1,775 cars), the model saw deliveries increase sharply in the UK (+17.3% to 958 cars), Italy (+88.6% to 415 cars) and France (+54.6% to 711 cars).

With around 25,650 cars handed over to customers, the company’s deliveries in North America rose 0.9 percent last month. Cumulatively the region closed August with around 171,850 units, a drop of 6.4 percent. In August, in the United States deliveries increased by 3.0 percent to 21,531 units, in Canada deliveries increased by 2.1 percent to 3,166 units. Demand for the Audi Q3, which only recently arrived at dealers, developed very positively in both markets. 2,420 American customers (+78.3%) and 730 Canadian customers (+136.2%) opted for the compact SUV. 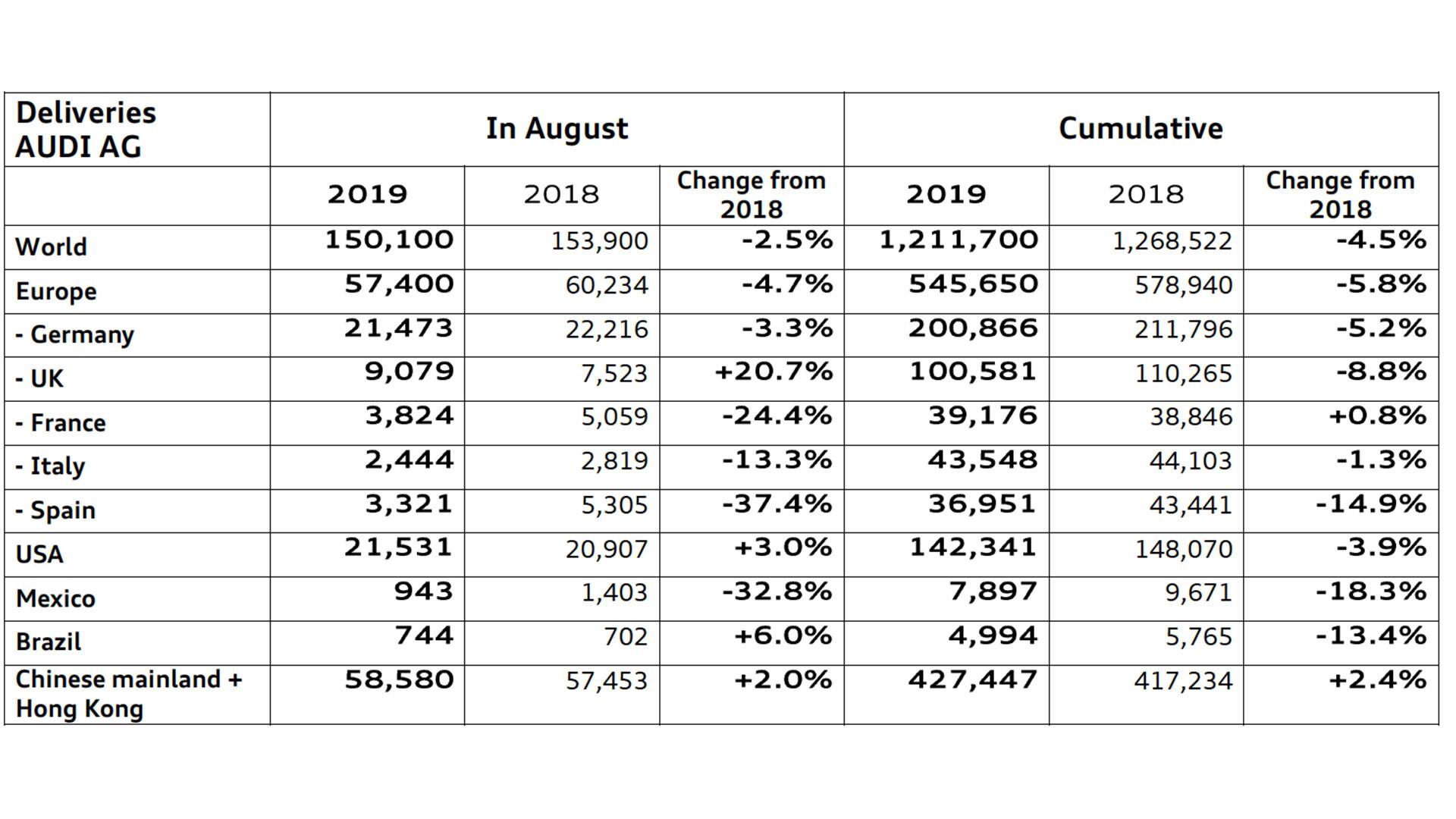 The Audi Group, with its brands Audi, Ducati and Lamborghini, is one of the most successful manufacturers of automobiles and motorcycles in the premium segment. It is present in more than 100 markets worldwide and produces at 18 locations in 13 countries. 100 percent subsidiaries of AUDI AG include Audi Sport GmbH (Neckarsulm), Automobili Lamborghini S.p.A. (Sant’Agata Bolognese, Italy) and Ducati Motor Holding S.p.A. (Bologna, Italy).

In 2018, the Audi Group delivered to customers about 1.812 million automobiles of the Audi brand, 5,750 sports cars of the Lamborghini brand and 53,004 motorcycles of the Ducati brand. In the 2018 fiscal year, AUDI AG achieved total revenue of €59.2 billion and an operating profit before special items of €4.7 billion. At present, approximately 90,000 people work for the company all over the world, more than 60,000 of them in Germany. Audi focuses on sustainable products and technologies for the future of mobility.